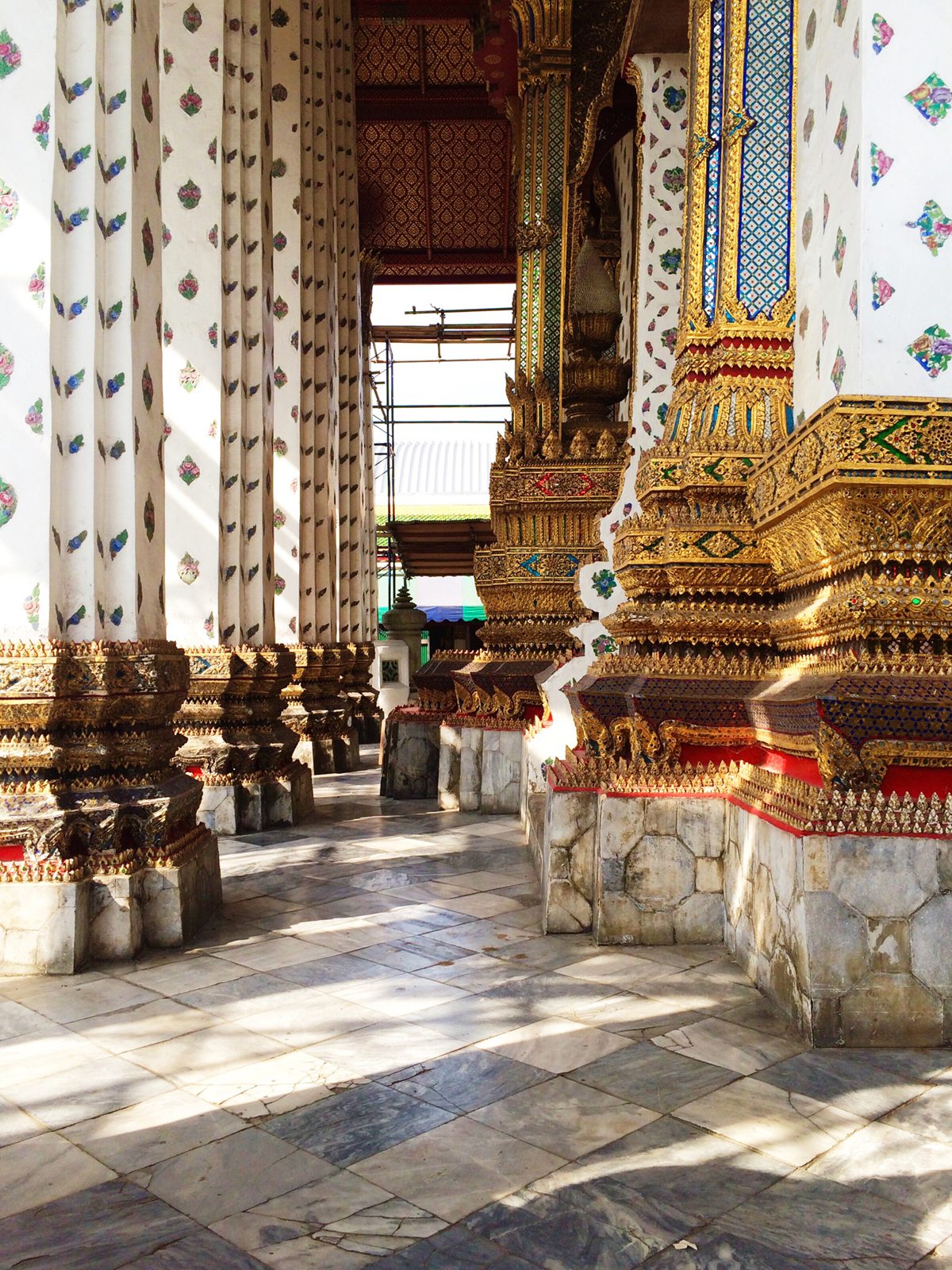 We arrived in Bangkok to surgical masks on faces, stares from locals and other travellers, cab drivers refusing to stop for us at Makkasan Station; whilst they happily stopped for Caucasian travellers; and an unbearable heat that made us hyper-sensitive to anything and everything. By the time we got to our hotel, we were feeling a bit assaulted by Bangkok, and like all we wanted to do was stay in our wonderfully air-conditioned rooms, get drunk and never come out again. Lugging around luggage up and down the street, whilst trying to figure out where you are going can leave you feeling defeated. Nonetheless, we had to eat so we went for dinner in the little street or Soi (a side-street branching off a main road) our hotel was located on, went to bed full, tipsy and hopeful that the next day would be a lot better.

We woke up the next day feeling less sensitive about the previous days experiences, but still curious about race relations within Thailand. Having never been colonised by the West, it was strange that racial discrimination would exist. However, according to sources like this blog post on a Black Experience in Thailand, darker skinned Thai people and people of a darker skin are considered to be of a lower class. The theory being that if you have darker skin this indicates that they do outdoor manual labour in the sun and you are uneducated but that if you have lighter or fairer skin you are educated, due to your work indoors in offices, banks etc and so forth.

From the skin lightening products from brands like Nivea, Garnier and L’oreal to the presenters, actors and models on tv or billboards with brown hair and fair skin, this trip to Thailand is the first time that the Mark Twain  quote below has really resonated with me.

“Travel is fatal to prejudice, bigotry, and narrow-mindedness, and many of our people need it sorely on these accounts. Broad, wholesome, charitable views of men and things cannot be acquired by vegetating in one little corner of the earth all one’s lifetime.” – Mark Twain in Mark Twain: The Innocents Abroad / Roughing It

With that being said “Thailand is an “assault on the senses.” – The Best Exotic Marigold Hotel.

This quote was used by my sister Lumka to describe Thailand, and what an apt description…

Our real first day in Bangkok was modelled off of day 2 in a Guardian UK article titled Bangkok in three days:holiday itinerary, which suggested starting the day off in Chinatown. However when we got off at the closest station near Yaowarat road, we ran into this old Thai man who informed us that Chinatown was only really opening after 6pm, which lead me to believe that the article wasn’t completely derived from actual experience. I watched with glee as the old man grabbed our map and made notes and doodles, as he took it upon himself to put together an itinerary for us that would end with us in Chinatown. He walked over to the nearest tuk-tuk driver and told him in Thai about his plans for us and turned around and reminded us sternly, but with a smile on his face about our itinerary for the day and what it should cost us to enjoy this itinerary. As per our unofficial tour guide’s instructions we hopped onto a long-tail boat to explore Bangkok via the Chao Phraya River with the boat’s final destination being Wat Arun also known as the Temple Of Dawn. Here we climbed out of the boat and joined the masses of people precariously climbing up the narrow staircase of the porcelain adorned temple to reach the final level where views overlooking the river could be experienced in noisy (because of all the people) stillness.After taking in the experience at Wat Arun we crossed over the river to the Wang Lang Market where I spotted Yukimi from Little Dragon and got so star struck that I couldn’t say hello. Here we grabbed something to eat from the market known for its southern Thai food. Exhausted and full we went past Wat Pho also known as the Temple Of The Reclining Buddha and past the Grand Palace – but could not go in because they had a ceremony happening there on the day. With several hours to kill before heading to Yaowarat, where Bangkok’s Chinatown is located, our confused lost looking faces attracted the attention of a middle aged Thai man who put together another tuk -tuk based itinerary for us that included a visit to Wat Benchama Bophit also known as the Marble Temple because it is built of Italian marble. The ride ended up with us in Chinatown, where we grabbed some food to eat and drank our way into an evening that ended with a hilarious ping-pong show and some selfie stick purchasing on Patpong Night Bazaar.

Our second full day in Bangkok was a shopping day. From Terminal 21 to Siam Paragon and Central World, the malls in Thailand are on another level. We shopped until 10pm, got home completely broken; but happy. I was particularly pleased because I found a pair of H&M x Alexander Wang leather pants on sale for 1300THB, which at the time of posting this, converted to about R462,89.

Even with the H&M x Alexander Wang find, nothing could have prepared us for the Chatuchak Weekend Market. This is where my brother and I spent our Thai Bahts wisely and generously. The market is overwhelming because of how much there is to buy and how much of it is similar, but we took the exact same approach to it as one should take when going thrift shopping – don’t get caught up in the missed the purchase, be prepared to not find what you are looking for but be open to finding something you didn’t plan for. I understand now why people say that you should assign an entire day to it if you are serious about shopping. Between trying to get leather bags at a good price, eating coconut ice-cream, hanging out at a bar located within the market playing old school hip hop and making new friends, Chatuchak Weekend Market is the shopping destination I would recommend if you are in BKK and looking to shop. From the shopping, Ladyboys, intriguing street food, Buddhist Monks taking selfies, pimped up tuk-tuks, men in suits offering prayers and small gifts at dollhouse-sized shrines and spirit houses outside of glossy skyscrapers, Thai massages, well-dressed girls shopping in the glitzy malls in Siam then eating from the street food stalls in Chinatown, pink sunrises through the buildings of Sukhumvit; Bangkok’s charm is in its beautiful, complex and enthralling mix of traditional and contemporary culture. “An assault of the senses.”

All images  shot on the iPhone 5S